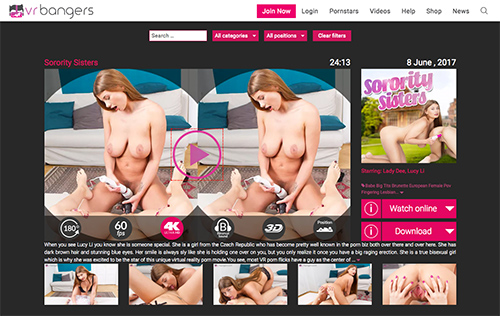 Leaders on the tech side of virtual reality. Their videos have hot and famous girls, and their quality is increasing. Their use of repeated scenery and generic dialogue takes away from the videos a bit, but their content is still good enough to set them up as one of the top 5 VR studios to date.

VR Bangers made their mark early on by delivering great production value with very hot girls and a user-friendly site. They have continued to hold to their standard of excellence, continuing to put out high quality videos while remaining an affordable option for the eager consumer.

VR Bangers have also established themselves as a pioneer in VR technology, both in and out of the adult industry. They have a tech store directly on their site where you can order some of the highest quality adult toys on the market. Their latest gadget is a progressive VR camera shaped like a human head, which captures 4K video in the closest approximation to human sight yet. If you're looking for videos on the bleeding edge of VR tech, a subscription to VR Bangers should be a serious consideration.

Since their launch, VR Bangers has put out content consistently while maintaining their videos' high production value.They still don't have the largest repertoire, but the sheer quality of their content makes the site more than worthwhile. With most of their videos in the range of 20-30 minutes, you'll find yourself completely immersed in countless fantasies with models ranging from the most popular starlets to fledgling amateurs eager to show you what they've got.